The thing I most remember the ER nurse telling us (oh, and great bed-side manner, by the way) was that taking the stitches out will probably hurt more than putting them in. Fortunately, Connor either didn't hear him or forgot he said it. But it has been weighing on my mind for the last 9 days. When I haven't been worried about him falling on the asphalt and ripping his lip open again, trying to dissuade him from salty fries or ketchup I have been worried about getting his stitches out.

We Are Potty Training

At least this time around its a tad more convenient. Connor decided to potty train when William was 3 months old. I can't tell you how many times he got ripped off the breast in mid-feed so I could run Connor to the potty. What a great introduction into the Dickson family.

William has been showing interest in the potty for a bit, so I did a ton of research looking for a small inexpensive potty for him. His legs are so short I figured there was no way he could climb on our toilet. We ran around to several stores before I finally gave in and ordered the Baby Bjorn Little Potty online. I spent as much on shipping as I did on the potty, almost.

I don't know if I like this new stage Lainy Ann is in. There have been lots of 'hard' stages in the last five years; being up all night when she was a baby, following her during the toddler years when she was making messes, potty training and then sending her off to school. But becoming independent has been really hard on us emotionally.

I noticed a new gray hair today while I was in the bathroom at the ER today. It wasn't there yesterday. Do you want to know why it is there today?

I was napping in the bedroom when I hear Connor crying and Lainy Ann say, "You're bleeding from the mouth. Quick go see Daddy!" Caskey met Connor at the door and I was already on my way out of the bed when I am hearing exclamations like "Oh My God" and "LESLIE!" 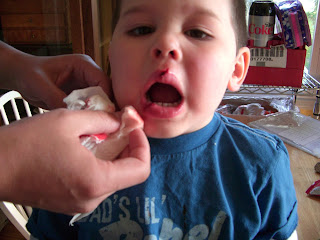 Connor's upper and lower lip were lacerated. Cut isn't even an accurate representation. It looked like someone had taken a razor bladed and sliced his lips wide open. There was no doubt it was an emergency room visit. The only question was who was going and what toys to take with us. But how did he sustain such an injury? Lainy Ann answered that question for us, "I threw a rock at him." I was envisioning a hand sized rock, but the cut was so severe that I was sure she mistaken and she had thrown a piece of glass or metal at him. A few simple words and Lainy Ann knew she shouldn't be asking questions, "Go get the rock."

This was more of a brick, it was larger than a softball. When we told the ER staff about the size of the rock they were shocked that a 5 year old would be able to throw a rock of that size. Even when I explained that she is the size of an average 7 or 8 year old they were amazed. 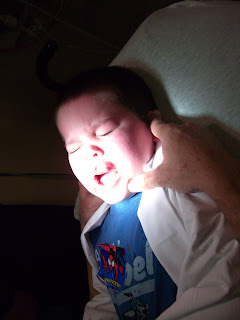 The ER visit went well and the staff was amazed at how calm Connor was. After he received the numbing shots he laid very still, bundled up, and closed his eyes, to avoid the bright light. At times I thought he had fallen asleep or passed out. He was SO still. And then when the PA started the stitch that would go just inside his bottom lip he opened his mouth wide so she would have better access. I was incredibly proud of his calm demeanor and helpfulness. It is truly in his nature to behave that way. This is not to say he didn't cry. The numbing shot was incredibly painful and he got about 8 injections. He screamed through the last two stitches saying, 'mommy'. But it could have been much worse. 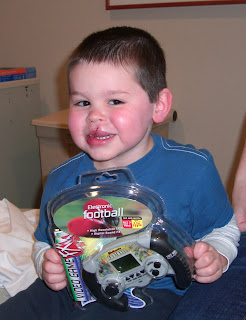 In all he has 11 stitches in both his upper and bottom lip. The upper lip has a 2-level stitch. His lips are huge and purple and eating is very difficult. But he got a new electronic football game from the ER staff to reward him for his good behavior. That seems to be all he remembers since when he greeted Papa he first showed off his new toy and Spiderman sticker. Oh, and the 'treats' of Jello, yogurt, ice cream, and applesauce for the rest of the day are keeping him in good spirits as well.

Lainy Ann is in big trouble to say the least. She has had her swing taken away (from the swing set), she had to help clean up all the blood, she has to carry the rock for the remainder of the day (to remind her of what she did to Connor), and she had her bed canopy removed. We just peeked on her after lunch time and she has fallen asleep with the rock on her chest. Sadly, when we ask her why she is crying she tells us she misses her swing. We are hoping to teach her empathy and cause and effect. She truly hurt her brother today in an unprovoked action. She knows well enough not to throw rocks. 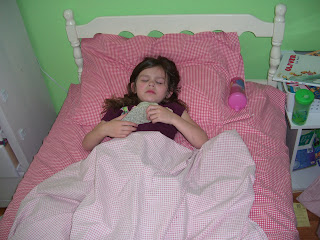 It has been a draining day an I'm not sure which is worse; comforting the injured child or teaching the attacker a lesson about hurting people. When someone hurts your child you want to lash out and protect them, even if it means hurting the attacker. Well, in this case its impossible. I want to protect them both. I don't want to punish Lainy Ann, but I don't want her to hurt another child either. I really wish she had just broken a window.

YMCA and The Little Gym

We have spent the last several months attending The Little Gym in La Canada. Prior to that we spent several years attending the YMCA in La Canada. Now why can't I meld them together to make the perfect place for my kids?


The Little Gym
Pros:
Well-trained, friendly, caring staff
Clean, neat and tidy
Thorough lessons with instructors that know how to teach and encourage children of all ages
Efficient use of time, children are never waiting around and classes are not cut short

Cons:
Not many morning offerings
There isn't an adequate area for siblings to wait
Expensive (about $20/class)
Classes are once a week
Few options for 3 year old boys
Huge classes (10-20 kids)

A Bunch of Comedians

They all have a sense of humor. Every single one of them. Now William is telling his own jokes. He often takes his pacifier and sticks it in his ear until I laugh. Or he will put it in my ear. Then yesterday in the car he took his shoes and socks off (his new favorite car activity) and put a dixie cup on his foot instead.

Of course no joke isn't complete without the laugh, so he continues to "aaaaaaahhhh" until we laugh or praise him appropriately. He is quite the ham.

A few weeks ago he emptied the laundry basket, climbed inside and yelled for Caskey to show off his accomplishment. Just now he climbed up the ladder in the castle and hollered until I came to see how high he had climbed.

I am continually amazed how different they all are, yet at the same time, how similar.

It started nearly a month ago now. My Kenmore Elite dishwasher started leaving soap residue on all the dishes. I had to rinse all dishes before using them. It was quite a hassle, but at least the dishes were still getting fairly clean. I called Sears Repair to come out and fix the dishwasher. I was given an appointment 2 weeks out.

Lainy Ann has learned so much in the last year. Not only did she start Kindergarten this fall, but she is now reading fluently on level 1 and some level 2 books. I think the birthday party activities are the biggest indicator of her growth this year.

This year we invited *her* friends from school, not just family friends. She chose the theme, flowers, and helped us get ready by running errands with me, taking stickers off of party favors and taking things out of packages. She helped frost the cupcakes and even chose her own party dress. She has become very independent and I am incredibly proud of that.

After her party, which was books only for gifts, she opened and read every single card out loud and by herself. I'm so proud. She opened the gifts and read me the book titles so we had a record of her gifts. The following day she buckled down and wrote half of her thank you cards. I wrote the sample for her and she wrote the cards.